On December 6, 2017, The City of Boca Raton held their 46th annual Holiday Parade and the “Great Sun Nation” showed up BIG!!! Over 60 member of our Nation united to participate in the march down US-1 to show their Holiday Cheer!!! The Cities theme this year was “Light Up Boca”, and The Great Sun Nation did just that….!!!! Our Holiday float had over 1,000 icicle lights on it, Holiday dancing lights projected all over, a real gas burning fire pit and our fearless leader “Flaming Owl” was leading the tribe with the “Spirit Stick” shooting flames 10 feet into the night sky… Additionally, most of the tribe was adorned in lighted necklaces or glow jewelry. The float was led by our kids holding the GSN banner while other kids handed out candy and flyers to the thousands of patrons lining the streets. Dads looked great too in their GSN vests and some wore their tribal headdresses all the time keeping an eye on the kids and keeping them safe. We were greeted by applause, ooohs and aaahs as we marched down the Federal Highway. Everyone had a great time and look forward to next year’s parade. 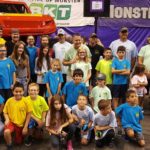